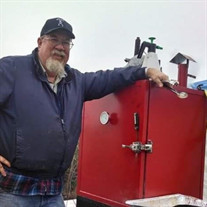 David E. Carter, Jr., age 66, of Ray City, Georgia and formerly of Fort Pierce, Florida, passed away on Thursday, February 17, 2022, after an extended illness, at his residence surrounded by his loving family. David was born September 19, 1955 in Valdosta, Georgia to the late, Dorothy Jean Mullis Carter and David Ellis Carter, Sr. David was a loving husband, father and grandfather. David was a retired Battalion Chief with the Saint Lucie County, Florida, Fire Department after thirty years of faithful and dedicated service. He was a member of the Georgia BBQ Association; his barbecuing team was known as The Arsonists. He was also a member of the Confederate Veterans of Georgia and operated train engines at the Railroad Museum in Savannah, GA. He is preceded in death by his parents; and one sister. Survivors include his loving wife of forty-five years, Kathy Holton Carter, of Ray City, Georgia; two daughters: Sally LeAnn C. Weiss and husband Rob of Philadelphia, Pennsylvania and Lindsey Ellyn C. Peterson and husband Josh of Branford, Florida; four grandchildren: Sophie, Jacob, Eli and Case; one brother, Mike Carter and wife Patricia of Fort Pierce, Florida; a sister, Mary Beth C. Brackett and husband Douglas of Blairsville, Georgia and several nieces and nephews also survive. A celebration of life service will be held at 11:00 O’clock AM, Saturday, March 12, 2022 at the First Baptist Church of Ray City, Georgia. Private family interment will be held at a later date. Kind words and expressions of sympathy can be left for the family at www.musicfuneralservices.com. The David E. Carter, Jr., family is being served by the caring and professional staff of Music Funeral Services, Valdosta. In lieu of flowers, donations can be made in David's memory to First Baptist Church of Ray City or Hospice of South Georgia.

David E. Carter, Jr., age 66, of Ray City, Georgia and formerly of Fort Pierce, Florida, passed away on Thursday, February 17, 2022, after an extended illness, at his residence surrounded by his loving family. David was born September 19, 1955... View Obituary & Service Information

The family of David Ellis Carter Jr created this Life Tributes page to make it easy to share your memories.