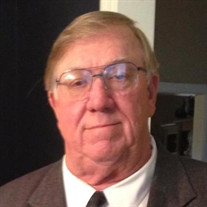 Reverend Duane Roberts Stokes went to be with his lord May 12, 2021. He was born September 18, 1947 in Sebring, Florida to Robert and Edna Stokes. He grew up on a cattle ranch near Lake Okeechobee where he spent his childhood working cows and bailing hay with his father. In 1965, Duane left home to attend Abraham Baldwin Agricultural College in Tifton, Georgia where he obtained a degree in Animal Husbandry but most importantly while there he met the love of his life Rhonda Ramsey from Lakeland, Georgia. They were married April 4, 1969 then moved to South Florida where he was drafted into the Army serving two years. After being honorably discharged, he and Rhonda moved to South Bay, Florida where he continued to ranch and grow sugar cane with his father and younger brother Eugene. After being blessed with two children, Buck and Rachel, the family relocated to Metter, Georgia in 1976 where Duane continued in the cattle business until the Lord called him to preach in 1980. Reverend Stokes service to the Lord took him from Metter to Lakeland, Georgia (Southside Baptist Church) to Doerun, Georgia (Grace Baptist). He retired from preaching in 1996 and started Bigun’s Homemade where he made jellies and jams from home grown fruit as well as various types of pickles. He was once again called to the ministry later in life to Good Hope Baptist Church in Naylor where he was pastor until the time of his death. Reverend Stokes enjoyed spending time with his family and friends and tending to his gardening and fruit trees. He also enjoyed golfing with his long-time friend Ricky Watson. He is survived by his wife of 52 years Rhonda Stokes, son Buck Stokes, Daughter and son in law Rachel and Ricky Roberts, grandchildren Tyler O’Connor (AJ), Brady Stokes (Destiny, fiancé), Drake Roberts, Cason Roberts, great-grandchildren Mako Stokes and Nixie O’Connor, Brother Eugene Stokes (Karen) Venice, Florida, sisters Marilyn (Sam) Petre, Tuscon, Arizona and Juanise (John) Hoover Crawfordville, Florida. A celebration of his life will be held at 2:00 PM Saturday, May 15, 2021 in the Good Hope Baptist Church, 7412 Good Hope Road, Naylor, GA 31641 with burial following in the church cemetery. A visitation and gospel sing will be held 1 hour prior to the service on Saturday. In lieu of flowers, donations are accepted to Good Hope Baptist Church, c/o Piano fund, P.O. Box 585, Lakeland, GA 31635. Sympathy may be expressed online at www.musicfuneralservices.com. The Stokes family is being served by the professional and caring staff of Music Funeral Services, 88 West Main St., Lakeland, GA 31635.

Reverend Duane Roberts Stokes went to be with his lord May 12, 2021. He was born September 18, 1947 in Sebring, Florida to Robert and Edna Stokes. He grew up on a cattle ranch near Lake Okeechobee where he spent his childhood working cows... View Obituary & Service Information

The family of Duane Robert Stokes created this Life Tributes page to make it easy to share your memories.

Reverend Duane Roberts Stokes went to be with his lord May 12,...

Send flowers to the Stokes family.