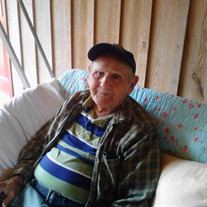 Flavious Jefferson Meade – 94 Of Lakeland, Georgia passed away on Wednesday, November 17, 2021 at South Georgia Rehab in Tifton. Known to all as simply Junior, he was born on June 14, 1927 in West Virginia to the late Thomas Jefferson Meade and Leona (Rose) Meade. At an early age, his parents and 10 siblings moved to Mount Dora, Florida. Later in life Mr. Meade met and married Burma McMillan of Alapaha, Georgia. They homesteaded in Mount Dora where they raised their 2 children, Mike and Lori. Their daughter Lori, later met Gary Yeomans from Lakeland, Georgia and got married. Lori and Gary moved both Mr. and Mrs. Meade to Lakeland to live out their golden years. Church of God by faith, Junior spent much of his life preaching and studying the Bible while also working as a painter by trade. Along with his parents, Mr. Meade is preceded in death by his wife of 62 years, Burma (McMillan) Meade and 9 siblings. Survivors include: children, Micheal Meade (Maxine) of Vinton, Virginia, Lori Yeomans (Gary) of Lakeland, Georgia; sister, Jane Woods of Sorrento, Florida; Grandchildren, Christopher Meade(Amanda) of Roanoke, Virginia, Jennifer Rivera (Matt) of Moneta, Virginia; step-grandchildren, Marty Yeomans (Michaela) of Nashville, Georgia, Karen Lee of Lakeland, Georgia; 7 great-grandchildren: Noah, Elaina, Conner, Rebecca, Natalie, Isabella, Christopher and numerous nieces, nephews and extended family members. A graveside service will be held at 2:00 PM on Saturday, November 20, 2021 in Greenlawn Cemetery, Lakeland, Georgia. Kind words and expressions of sympathy can be left for the family at www.musicfuneralservices.com. The Meade family is being served by the professional and caring staff of Music Funeral Services of Lakeland.

Flavious Jefferson Meade &#8211; 94 Of Lakeland, Georgia passed away on Wednesday, November 17, 2021 at South Georgia Rehab in Tifton. Known to all as simply Junior, he was born on June 14, 1927 in West Virginia to the late Thomas Jefferson... View Obituary & Service Information

The family of Flavious Jefferson Meade created this Life Tributes page to make it easy to share your memories.

Send flowers to the Meade family.