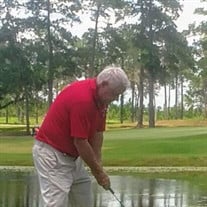 Francis Marion Gay, Sr. passed away Thursday, January 20th after a brief battle with Covid. Dad was a young 81 years old. Many of you knew him as Doodaddy, Buddy and Frank. He is preceded in death by his parents, Sam and Bessie Gay; Siblings: Raymond Gay and Jack Gay; Grandchildren, Pruitt Allen Rainey. If you asked all of his friends who Frank was, they'd all give you a different story. His golfing and fishing buddies would all tell you how competitive he was because he was relentless on taking your money but turn around and give it all back to you with a smile, a handshake and say, "what time are we playing tomorrow?" Dad always said that golf was such a beautiful game and music a way of life that brought everyone together to share their love for each other. Dad just loved playing golf and the friendships he had with his closest friends like "Shag", "Duck", "Fulp", "Raymond Ramon", and many others who had so many nick names in which they called each other through life. Music was dad's biggest passion, and man could he sing. From Elvis, to Charlie Rich, Johnny Cash, to the Beatles, dad had such a powerful voice and so much love for music he shared for over 40 years. Creating his own long-time band, the "Frank Gay Five" to the "Waysiders" who traveled every weekend chasing that dream, but more importantly trying to make a living for his so loved family; he was the Patriarch. Dad never once stopped singing, even though his late years, with his youngest son Bryan. Watching Bryan and dad together on-stage singing Merle Haggard songs will never be forgotten in this lifetime. Bryan will definitely carry-on dad's love and passion for music. Many know how unbelievably passionate dad was for the outdoors and sports. He started us all playing sports and those lessons in life at a very early age. Fishing, hunting, trapping, baseball, softball, football, basketball, tennis, golf, horse shoes, ping pong. You name it, dad played it, and he was great at it. He never once let you win a game or outperform him because he wanted you to work for it. Dad once stated clearly, "it's better to be a good loser than a poor winner. Always shake their hands and say yessir and no ma' am." Dad taught you to work hard leading by example. Dad always said, "work for what you want, nobodies giving it to you, don't ever complain just go earn it." Dad was a champion in life and the patriarch of our family & friends. He loved you unconditionally. The greatest father ever. Dad was born on August 2, 1940 in North Brooks County and grew up in Sand Hill on the forks of the dirt road called "Chitlin Switch". siblings: Guy Gay, Elizabeth Glass, Betty Ann Holmes, Mildred parks and Linda Plymell. Dad graduated Barwick High School in 1957 as a basketball star and married Laura Olivia Deas (Libby) from Berlin, Ga. Mom and Dad would have been married 60 years this year. Survived by his children, oldest son Francis Marion Gay, Jr. Frankie (Laura Lee), daughter Traci Olivia Gay (Taylor) and Samuel Bryan Gay (Stephanie). Grandchildren: Francis Marion Gay III Traci (Alan), Kamille (Kami) Dean, Brodie Bon Gay, Stone Ross Gay, Jase Pruitt Alexander Gay, Jack Bryant Gay, Jon Healey Gay, Luke Carney, Jordan Taylor, Calie Smith. Great grandchildren, Lola Jude Dean, Gatlin dean with more on the way. In closing, Dad will never be forgotten and will live on in our lives forever through his children, grandchildren and great grandchildren. "Always Remember, there was nothing worth sharing like the love that let us share our name" The funeral service will be held at 10:00 O’clock AM, Monday, January 24, 2022 at Music Funeral Services, 3831 N. Valdosta Rd, Valdosta, Georgia 31602. Interment will follow at Pleasant Hill Cemetery, 1048 John Buck McCoy Road, Berlin, Georgia. The family will be receiving friends Sunday, January 23, 2022 from 4:00 P.M. to 6:00 P.M, at Music Funeral Services, Valdosta. I'm sure dad is in Heaven playing golf with some of his old buddies that have since moved on and his grandson Pruitt. His voice and songs will always live on through us all. God Bless our Father Doodaddy

Francis Marion Gay, Sr. passed away Thursday, January 20th after a brief battle with Covid. Dad was a young 81 years old. Many of you knew him as Doodaddy, Buddy and Frank. He is preceded in death by his parents, Sam and Bessie Gay; Siblings:... View Obituary & Service Information

The family of Francis (Frank) Marion Gay, Sr. created this Life Tributes page to make it easy to share your memories.