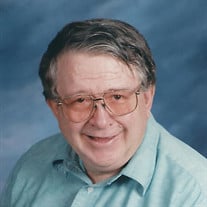 GERALD(Jerry) WAYNE LINXWILER July 17, 1939 to April 9, 2021 Gerald “Jerry” Linxwiler, age 81, of Valdosta, Georgia, passed away early Friday morning after a valiant battle with Dementia. Gerald was born in Evansville, Indiana, and attended Junior College there. Jerry then attended Chapman College where he met Diane Elam working in the Cashier’s Office. They married on July 19, 1968. He later earned a Master’s Degree in science from California State University Fullerton. Jerry served in the Navy for 2 years and served an additional 2 years in the Naval Reserve. Jerry worked for the family business ABC Paint Striping. Jerry also worked for many years at Disneyland but his heart was always in Library Science. He loved being surrounded by books and knowledge. Jerry had an extensive collection of naval history books and bookmarks from around the world. Jerry was a librarian for a university, for local, regional, and county library systems and for Hill AFB. He encouraged reading and worked to get books into the hands of every youth. He passionately argued against book censorship and encouraged us all to read a book before we judged it. Jerry was the head of the library in Wheatland, Wyoming. There he had a weekly radio show to encourage literacy. He welcomed guest lecturers into the library; our favorite was an authentic mountain man covered in furs. The library had many cooking demonstrations where he shared his passion for Chinese food. Jerry was an avid photographer who won several awards. He got the shots but often terrified mom in the process. He filled the home with his beloved Scottish pipes and drums music. He was passionate about historical sites especially if they included naval history, tall ships or military forts of the Old West. He loved to explore historical locations and museums. Even in his final days with his battle with Dementia, he would answer almost all his beloved Jeopardy questions. Gerald is survived by his loving wife Diane Elam Linxwiler of Valdosta, GA; children Heather and Paul Ellis of Valdosta, GA; and Amber and David Ray of Santa Ana, CA; and grandchildren Jared, Savannah and Daniel Ellis of Valdosta, GA. The family of Jerry Linxwiler would like to thank the caring people of Hospice of South Georgia and Langdale Hospice House who do the work of angels. The family would especially like to thank Catherine and Sandra of Robert Lambert’s Elder Care Law, Stephanie and Jessica of Comfort Keepers and Keisha, Brandi and Tyler of Hospice of South Georgia. You were our rock and our stays. A graveside service will be held 11 AM, April 14, 2021, at McLane Riverview Memorial Gardens. The family requests that in lieu of flowers please donate to your local library. Messages of sympathy may be expressed to the family by visiting www.musicfuneralservices.com The Linxwiler family is being served by the compassionate and professional staff of Music Funeral Services of Valdosta.

The family of Gerald Wayne Linxwiler created this Life Tributes page to make it easy to share your memories.

Send flowers to the Linxwiler family.