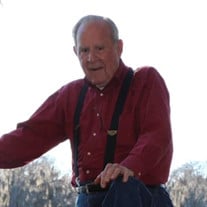 Harold Eugene Hughes – 86 of Echols County, Georgia passed away on Thursday January 7, 2021 in the South Georgia Medical Center after a brief illness. He was born on May 6, 1934 to the late Carl and Norma Hughes, both lifetime residents of Echols County. Harold was a hardworking man and for many years he worked for Vallaton Milk Co., Dairy Co., and Joseph’s Produce before branching out on his own. His drive and work ethic lead to the opening of “The Farm House Restaurant” in Lake Park, Georgia. The success of this business was one of his greatest accomplishments. His personality and love for people lead to many lifelong friendships through the years. Harold loved all of his law enforcement friends especially the Georgia State Patrol, Echols County Sheriff’s Department and Lowndes County Sheriff’s Department. This led to him becoming an Honorary Georgia State Patrol and Honorary Deputy with the Echols County Sheriff’s Department. He was affectionally known to most of them as “The Colonel”. Harold had a true love for life and lived his to the fullest. He will be dearly missed by his friends and family. He was preceded in death by his wife, Shirley Hughes. Harold is survived by two children: Daughter, Patricia Brady and son-in-law Denis of Matawan, NJ, Son, Scott Hughes of and daughter-in-law Stephanie of St. Augustine, FL; Grandchildren: Nicole DeSantis of Hazlet, NJ, Sarah Hughes of St. Augustine, FL; Great Grandchildren: Anthony, Jack, and Nicholas, all of Hazlet, NJ; Brother, Charles Lynn Hughes of Echols County; Sister-in-law, Sandra Hughes of Echols County; He is also survived by many wonderful nephews, nieces, grand nephews and grandnieces. Graveside services will be held at 2:00 PM on Tuesday, January 12, 2021 at Carter Cemetery in Echols County, Georgia. No formal visitation will be held. The family encourages safe social distancing and face coverings be worn. The Hughes family is being served by the professional and caring staff of Music Funeral Services, Valdosta.

Harold Eugene Hughes &#8211; 86 of Echols County, Georgia passed away on Thursday January 7, 2021 in the South Georgia Medical Center after a brief illness. He was born on May 6, 1934 to the late Carl and Norma Hughes, both lifetime residents... View Obituary & Service Information

The family of Harold Eugene Hughes created this Life Tributes page to make it easy to share your memories.

Send flowers to the Hughes family.