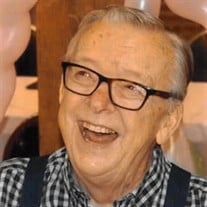 Henry Dan Berry passed away March 30, 2022. He was 90 years old. Hank grew up in Hall County Georgia and, at an early age, survived the tornado of 1936. This was a story he enjoyed telling. With the outbreak of Korean War, Hank answered the call to service, even though he was just 16, and after enlisting in the Navy, Uncle Sam said to wait a while. When the time was right, the U S Air Force accepted his call to service. While stationed at Tacoma Washington, Hank met and married the audacious Betty Bowden. They married in 1952 at McChord Air Force Base. Four children came along in 5 years: Susan, Cathee, Bill and Barbara, along with a menagerie of dogs, cats and fish. His Air Force career lasted 22 years and 26 days. He achieved the rank of Senior Master Sargent. Duty stations included Barter Island Alaska, Okushiri Japan, and Tehran Iran and many state-side bases. Hank received many awards over the years of service for his dedication and his abilities as a medical instructor. Retirement from active duty occurred in Valdosta Georgia, where the family settled down in 1972. Building on a military career as a medical services supervisor, Hank taught the first class of Advanced Emergency Medical Technicians locally. After this academic endeavor, Hank accepted a position at Langdale Lumber Company as a medical and safety officer. He passionately enjoyed music and was particularly fond of Celtic music. Hank enjoyed fishing almost as much as he enjoyed a good fish tale. A highlight of his life was a charter trip to Destin, Florida. A fight broke out and Hank was the victor against a 66-pound sail fish. The fish hung proudly on the wall of their home the rest of his days. Hank, Dad and Pa, you will be sorely missed' He was preceded in death by his wife of 65 years Mary Elizabeth (Betty) Bowden, his parents Howard Dionysus and Ruth Mae Jordan Berry, Brother Bill Berry, Sister Betty Bartholomew and son in law Ross Newton. Survivors include children: Susan (Joe) Roberts, Cathee (Mac) Bollinger, Bill (Gail) Berry and Barbara Newton; his nephew Tim Berry, Brother Leland Berry; grandchildren: Diane (Jeff)Steuwe, Roxanne (Nick) Mintz, Heather Roberts, Casey (Mandy) Boswell, Carrie (Bill) Richards, Ross (Bre) Boswell ,Matt Snow, Matthew Newton (Lindsey), Tyler (Mamie)Newton, James (Toryn) Newton and Kathleen Newton; great grandchildren: Andrew Wood, Kaelyn Gilliard, Jack (Beth) Steuwe, Julian Boswell, Holly Boswell, Julia Newton, Lauren Mintz and Merrissa Boswell; great-great grandchildren: Liam and Wren Gilliard and Kodi Steuwe. The family would like to thank the wonderful staff at Langdale Hospice and Lakeland Villa for taking such good care of Mr. Berry. Funeral services will be held on Monday, April 4, 2022 at 11 o’clock a.m in the Valdosta Chapel of Music Funeral Services. The family will receive friends on Sunday April 3, 2022 from 5:00 – 7:00 p.m. at the funeral home. Interment will follow the funeral service in the Riverview Memorial Gardens with rendering of full military honors. Kind words and expressions of sympathy can be left for the family at www.musicfuneralservices.com. The Henry Dan Berry family is being served by the professional and caring staff of Music Funeral Services of Valdosta.

Henry Dan Berry passed away March 30, 2022. He was 90 years old. Hank grew up in Hall County Georgia and, at an early age, survived the tornado of 1936. This was a story he enjoyed telling. With the outbreak of Korean War, Hank answered the... View Obituary & Service Information

The family of MSgt. (Ret.) Henry Dan Berry created this Life Tributes page to make it easy to share your memories.

Send flowers to the Berry family.