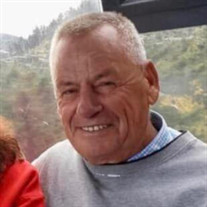 On Sunday, December 19th 2021, Herman Kleiboer, loving husband of Sally Kleiboer and father of five children, passed away at the age of 79. Herman Kleiboer was born November 3, 1942 in the Netherlands to Johannes & Alida (Telgen) Kleiboer. He and his family emigrated to Canada after World War II and from there he eventually moved to Belleville, NY. He was married to his wife Sally Kleiboer for 18 years. He was the owner of Kleiboer Construction, a volunteer fireman at the Smithville fire department, and recently a foreman of a land clearing operation in Lakeland, Georgia. Herman was a devoted family man and a friend to many people, of which he called family. He was an avid history buff, especially of World War II, and on many a Sunday he could be found in a museum with his children. After working a long day on the job site, he would spend time working on his flower beds full of roses, various flowers and especially tulips as a nod to his native homeland. In his younger days, he was an avid stock car racer on local dirt tracks. Some would say he still raced cars if you ever were a passenger in his vehicle. He loved playing sports especially golf, bowling, Nintendo Wii, and volleyball with his family, most likely sporting his trademark work boots and cutoff jeans.  At the age of 70 he switched careers and went into strictly land clearing. Many of the people that worked with him would talk about his work ethic and how he could out hustle them even in his later years. He loved living in Georgia with the warm weather and genuine southern hospitality. Family came first for Herman. His love for Sally was apparent to all that met them. They would spend their Sundays drinking gourmet Bloody Marys made by Sally, trips to the beach, and impromptu dancing in the kitchen. He could be found dancing with Sally, where nothing else mattered, but the happiness they shared with each other as they moved so easily in sync, just as they did in life. He would pick up his grandchildren and dance in the kitchen to Billy the Bass singing. There are many stories about how he would surprise his children with unexpected visits or dropping in on relatives unannounced. Although he will no longer be with us; his values, work ethic, friendship, and love will be with us forever. He will be sadly missed by wife, Sally, five children: Kristen (Jeanne), Kara (Melinda), Katrina (Paul), Kirk (Erin), and Kyle (Michelle) Kleiboer as well as Sally’s three children: Brian (Sherre), William (Miranda), and Tammy (Dave). Fifteen Grandchildren: Theresa, Da’Naya, Daelan, Breanna, Elizabeth, Anthony, Susan, Emmalee, May, Christopher, Kaitlyn, Mikayla, Brayden, Evelyn, and Dahlia. Siblings Gerry (Helen), Anne (Barry), Brian (Ellen), Butch (Shelly), brother-in-law Dave (Gail), and many nieces and nephews. He was predeceased by his parents, bonus parents Budd and Evelyn Baker, wife Susan, brothers Joe and Tony, sister Margo and sister-in-law Valerie. A celebration of life will be held in Lakeland, Georgia and in Adams, NY in the month of July, both at a date to be announced. Kind words and expressions of sympathy can be left for the family at www.musicfuneralservices.com. The Kleiboer family is being served by the professional and caring staff of Music Funeral Services of Lakeland.

On Sunday, December 19th 2021, Herman Kleiboer, loving husband of Sally Kleiboer and father of five children, passed away at the age of 79. Herman Kleiboer was born November 3, 1942 in the Netherlands to Johannes & Alida (Telgen) Kleiboer.... View Obituary & Service Information

The family of Herman Gerrit Kleiboer created this Life Tributes page to make it easy to share your memories.

Send flowers to the Kleiboer family.