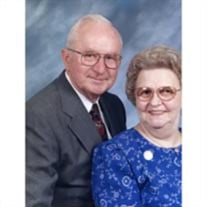 Rev. James N. Young, Sr. at 91 years of age, left this world for a better inheritance on January 15, 2022. He was born on June 15, 1930 in Dupont, Georgia, to Newt and Geneva Young from the Clinch County area. James graduated from Lanier County High School in 1947 and joined the US Navy shortly thereafter. He married his High School sweetheart, Jonye Jean Pearce and together they were blessed to have three children: Darla, Jimmy and Deborah. At his departure, he had 13 grandchildren and 24 Great Grands. James was preaching even before he retired from the Navy in 1967. He affiliated with Evangel Ministers Fellowship in Pensacola, Fla. which led to his calling to serve as a missionary in British Honduras, Central America in the early 1970s. Prior to becoming a missionary, James and Jean were the founding pastors of Calvary Temple Church in Valdosta. From 1975 to 2001, he served several churches in North Florida and South Georgia, with a five year stretch as House Parent at the Florida Baptists Children’s Home in Tallahassee, Fl. James completed his ministry service in 2001, retiring from the Cecil Baptist Church. Throughout his ministry, James had a profound influence on many young people who entered ministry because of his example and mentorship. He was a member of the Spinrghead United Methodist church, he loved sharing the love of God with everyone he met. After Jean’s departure to be with the Lord in 2015, James lived alone for a time and then with Darla and Steve for almost three years. Needing a higher degree of personal care, James lived in assisted living in both Lakeland and Sparks, Georgia. James is preceded in death by his parents, sister Louise Isaac Gilley, brother Caroll Young, and granddaughter Cyndel Young. Surviving are daughter Darla Jackson(Steve); son James N. Young, Jr; daughter Deborah Wilson (Dennis); and 31 grands and great-grands; sister Sarah Young Lucas of Valdosta, numerous nieces, nephews and extended family. Funeral services will be held at 2:00 P.M. Thursday, January 20, 2021 in the Lakeland Chapel of Music Funeral Services. The family will receive friends from 1 -2 pm Thursday at the funeral home. Private, family-only interment will be held at Unity Cemetery following the service. The family has requested that no flowers be sent and that contributions be made in Rev. Young’s honor to the missions fund at Springhead United Methodist Church, c/o Cheryl Chaney 272 Bud Guthrie Road Willacoochee, Georgia 31650 to support overseas missions. Kind words and expressions of sympathy may be left for the family at www.musicfuneralservices.com. The Rev. James N. Young, Sr family is being served by the professional and caring staff of Music Funeral Services of Lakeland.

Rev. James N. Young, Sr. at 91 years of age, left this world for a better inheritance on January 15, 2022. He was born on June 15, 1930 in Dupont, Georgia, to Newt and Geneva Young from the Clinch County area. James graduated from Lanier County... View Obituary & Service Information

The family of Rev. James Newton Young Sr created this Life Tributes page to make it easy to share your memories.

Send flowers to the Young family.