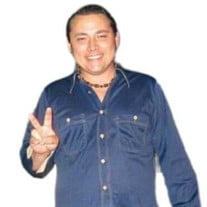 Jason Nathaniel Bozik, 44, singer, songwriter and guitarist passed away Thursday July 1, 2021 in Nashville,TN. Jason was preceded in death by his father, Jim Bozik. He was survived by his wife, Monica Bozik, his mother, Betty N. Hicks, and stepfather, Tommy Hicks; his sister Lisa Bozik, and his brother Vincent Bozik, by his nephews Hunter Hall and Dustin Hall, his stepsons Shan, Cameron and Nathan Balance. Music was not in Jason Bozik's blood- it was the blood that fed his passion, his creativity and his lifelong career. Before even graduating high school, Jason had already hit the road with his first touring band,­ rundown bus, local musician friends and big dreams in tow. And he never wavered from that path. Jason moved to Nashville in 2004 to further his music career, and after years of playing and singing in other projects, he embarked on his own project- fronting the Jason Bozik Band- to deliver his own brand of music. Pure musical talent set Jason apart from other stage performers, and kept the audience listening and loving it. His personality and his music touched so many lives and left a lasting impact on everyone he knew. Jason was not only a musician; he was a teacher and inspiration to many. To know Jason was to love Jason, and he returned that love to everyone. He loved his family, his wife and his musical family so much. A celebration of life will be held on Sunday, July 11, 2021 at the Elks Lodge, 422 Victory Drive, Tifton, GA 31774, with Rev. Ashley Williams officiating. The service will start at 2:00 pm on Sunday, July 11, 2021 for anyone who would like to celebrate and honor Jason. Please visit www.musicfuneralservices.com to leave words of sympathy and kind messages for the Jason Nathaniel Bozik Family. Music Funeral Services, 3831 North Valdosta Road, Valdosta, Georgia, 31602, is assisting the Jason Nathaniel Bozik Family.

Jason Nathaniel Bozik, 44, singer, songwriter and guitarist passed away Thursday July 1, 2021 in Nashville,TN. Jason was preceded in death by his father, Jim Bozik. He was survived by his wife, Monica Bozik, his mother, Betty N. Hicks, and stepfather,... View Obituary & Service Information

The family of Jason Nathanial Bozik created this Life Tributes page to make it easy to share your memories.

Send flowers to the Bozik family.