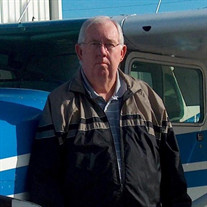 John Scott Woolfolk – 74 Of Valdosta passed away unexpectedly on Monday, December 20, 2021 in Cairo, Georgia while tending to his old homeplace. Mr. Woolfolk was born on July 28, 1947 to the late William and Claudia Woolfolk in Cairo, Georgia. He was an electronic technician retiring after 35 years in his field. Mr. Woolfolk was a graduate of Cairo High School class of 1965. He was an aviator and was an instrumental part in developing the Brooks County 911 system. He served as a volunteer fireman for East Brooks Fire Department, and was the area Vice-President for Communication Workers of America. John was the owner-operator of Southern Belle Travels. He was a 4-H volunteer and a LHS band booster Vice-President from 1990-2000 and was Baptist by Faith and was an avid photographer. He was preceded in death by his parents. He is survived by his loving wife of 42 years, Janette Woolfolk of Valdosta; son, Scott Woolfolk of Valdosta and his brother, Billy Woolfolk (Gail) of Cairo; nieces, Beth Woolfolk and Kelly Howthorne (Travis) of Cairo, Georgia; nephew Steve Pulliam (Jennifer) of Calhoun, Georgia; nieces Vicki Quinn (Anthony) of Resca, Georgia and Cindy Walters (Aaron) of Dalton, Georgia; aunts, Polly Whiddon, Joann Baggette, Virginia Shealey; sister-in-law and spouse Barbara and Melven Pulliam; brother-in-law; Lamar Dillard; sister-in-law Annelle Hindman and special friends Don Ganas, Jim Hewitt, Jack Scoggins all of Valdosta and Donovan Fletcher of Cairo, Georgia. The family will receive friends from 6:00 PM – 8:00 PM on Thursday, December 30, 2021 at Music Funeral Services in Valdosta. Per John’s wishes, memorialization will be by cremation and his remains will be interred in the Greenwood Cemetery, Cairo. Kind words and expressions of sympathy can be left for the family at www.musicfuneralservices.com The Woolfolk family is being served by the professional and caring staff of Music Funeral Services of Valdosta.

The family of John Scott Woolfolk created this Life Tributes page to make it easy to share your memories.

Send flowers to the Woolfolk family.