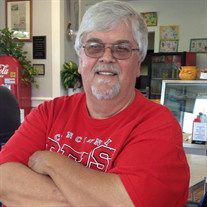 Joseph A Chalfant Joseph A Chalfant passed away on Saturday, October 17, 2020 while traveling home from Siesta Key, FL in Lake Park, GA. He was traveling with his wife of 49+ years, Judith Chalfant. Joe was loved and cherished by his entire family, and especially his beloved wife Judy. Joe was a dedicated family man and loved spending time cooking and traveling with his family. One of his favorite trips was the annual trek to the Indianapolis 500 Race with his son Andrew and his grandson Zachary. He is preceded in death by Rexford Chalfant (Father) and Violet Rinard Chalfant (Mother) as well as his loved aunts MaryAnna Utt (John) of Mt Summit and Faith Jackson (G.O.) of New Castle. Joe and his brother Steve were both Boy Scouts through Highschool. They both went to the 1964 Boy Scout Jamboree in Valley Forge, PA. Joe was on the stage with President Lyndon B. Johnson during his address. He was an Army Veteran, where he served as Military Police for four (4) years in Tokyo, Japan during the Vietnam War. He graduated from New Castle Highschool in Indiana, where he played football as a Line Back, and IUPUI with a major in Environmental Health Science. He had a long and varied career in Public Health in Indiana, Jackson Hole, WY, Los Angeles, CA, New York City, and Cincinnati, OH. He was the Registered Sanitarian at the City of Norwood Health Dept for the last 20+ years prior to his retirement. He is mourned by his wife Judith Chalfant, son Andrew Chalfant, daughter Jennifer Hinninger (Michael), and his five grandchildren: Zachary, Jacob, Abigail, Carson and Benjamin all of Amelia/Cincinnati. Also, his brother Steven Chalfant (Karen) of Mt Summit, IN, and sister Janice Gross (Randy) of Spiceland, IN, also survived by nephews, nieces and cousins. Please join us in celebrating the life of Joseph A. Chalfant on Saturday, November 14, 2020 at 2PM at the Mt Washington Baptist Church in Cincinnati, Ohio. He will be interred later at the Western Reserve National Cemetery in Dayton, OH with a military ceremony.

Joseph A Chalfant Joseph A Chalfant passed away on Saturday, October 17, 2020 while traveling home from Siesta Key, FL in Lake Park, GA. He was traveling with his wife of 49+ years, Judith Chalfant. Joe was loved and cherished by his entire... View Obituary & Service Information

The family of Joseph A. Chalfant created this Life Tributes page to make it easy to share your memories.

Joseph A Chalfant passed away on Saturday,...

Send flowers to the Chalfant family.