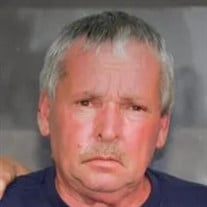 Louis Carlton Croft, 58, of Naylor, Georgia passed away on Thursday, March 17, 2022 at his residence. He was born on August 15, 1963 in Lakeland, Georgia to the late Jackie Laverne Croft and Irma Jane (Stone) Croft. Louis got much joy out of doing things for his family, friends and neighbors. He would loan out his backhoe or go fix a neighbor’s driveway. His back would be giving him a fit but he would not let it stop him from putting up hand rails with friends and sharing laughs. Sweet potatoes, Louis loved the simple things in life. He loved to fish and was looking forward to his next trip. He loved his fast boat and bragged about how his son had given his old boat a good spin the last time they took it out. Shanna was always there to put minutes on his phone or get his Facebook back online. If she ever needed anything she knew where to go. With his son Robert and his wife Vicky’s passing, he lost a big chunk of his heart. Vicky was his partner and “Woman”. Louis loved Vicky’s mama and would often go by and check on her. The “Grands” and “Great Grands” loved to spend time at their Papa Louis’s house and they would even bring their friends to spend the night. He would let them eat constantly and would laugh and giggle with them about how much their little bellies could hold. His older grandson wanted a four-wheeler so he worked on one and got it running and told him to go get gas money from his other Papa. He didn’t mind stopping what he was doing to carry him some shells to go hunting because he knew he would get deer sausage out of it. We all know Louis would grumble and carry on, but he did everything with love and lots of it. Along with his parents he is preceded in death by his wife, Vicky Irish Croft, son, Robert Croft and sister, Loretta Croft. He is survived by his son, Jackie Croft (Jessica), Naylor, Georgia; daughter, Shanna Croft, Naylor, Georgia; grandchildren: Jackie Daniel Croft, DaShaw Sirmans, Jaycee Croft, Kyleigh Smith, Aubree Stewart, Rayleigh Delk, Madison Harnage, Mason Shields; great grandchildren: Lovee Jackson, Tre’son Jackson, Malacai Jackson; sister, Gladys Kirkland (Ronald), Valdosta, Georgia; brother, Gene Croft, Tifton, Georgia; brother, Kenny Croft, Lakeland, Georgia; sister, Cathy Croft, Naylor, GA; numerous nieces, nephews and extended family members. Funeral service will be held at 2:00 PM on Sunday, March 20, 2022 in the Lakeland Chapel of Music Funeral Services with burial to follow in Burnt Church Cemetery, Lakeland, Georgia. The family will receive friends from 6:00 PM until 8:00 PM on Saturday, March 19, 2022 at the funeral home. Kind words and expressions of sympathy can be left for the family at www.musicfuneralservices.com. The Croft family is being served by the professional and caring staff of Music Funeral Services of Lakeland.

Louis Carlton Croft, 58, of Naylor, Georgia passed away on Thursday, March 17, 2022 at his residence. He was born on August 15, 1963 in Lakeland, Georgia to the late Jackie Laverne Croft and Irma Jane (Stone) Croft. Louis got much joy out of... View Obituary & Service Information

The family of Louis Carlton Croft created this Life Tributes page to make it easy to share your memories.

Louis Carlton Croft, 58, of Naylor, Georgia passed away on Thursday,...

Send flowers to the Croft family.