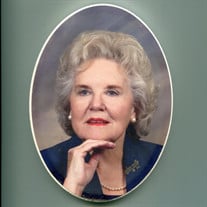 Martha Francis Neugent of Lakeland, Georgia passed away Tuesday, June 1, 2021 after a long battle with Alzheimer’s Disease. She was born April 3, 1936 to the late Mary Kathleen and Benjamin Franklin Bruce in Gainesville, Georgia. Mrs. Neugent served as Clerk of Superior Court and Juvenile Court for over 32 years and became the first woman to serve in elective office in Lanier County. Elected to lead the Second District Clerks of Superior Court in 2001 and 2002, Mrs. Neugent was named District Clerk of the Year in both 2002 and 2003. She was a charter member of the Lakeland-Lanier County Chamber of Commerce, and a member of the Lakeland United Methodist Church, the John Floyd Chapter of the Daughters of the American Revolution, the Superior Court Clerks Association of Georgia, and the Juvenile Court Clerks of Georgia. Prior to her election in 1976, Mrs. Neugent worked at Louis Smith Memorial Hospital and Farmers and Merchants Bank. She was a graduate of Lanier County High School and Abraham Baldwin Agricultural College. She is remembered by family, friends, and colleagues for her toughness and tenacity, characteristics that served Mrs. Neugent well during her three plus decades of service within county government and the legal community. Mrs. Neugent was happiest as a caregiver, compassionate especially toward those grieving the loss of a loved one. Her faith was rooted in the Word of God and an exemplary credit score. She experienced life through travel, visits with friends and family, an affinity for reading, and frozen margaritas. Along with her parents, she was preceded in death by her husbands: John Vickers Neugent & Dalton T. Sirmans, Sr.; sister Margie Nell Ferguson and brother-in-law Oliver Farr. Survivors Include her daughter and son-in-law, Felicia and Kevin Moore, of Lakeland, Georgia; son and daughter-in-law Dalton T. and Margie Sirmans, of Palm Coast, Florida; grandchildren Andrew and Becky Moore of Lakeland, Georgia, Macy Marie Sirmans of New York, New York, John Raymond Moore of Nashville, Georgia, and Katherine Moore of Lakeland, Georgia; great grandchildren Rebecka Anne Moore and Andon Raymond Moore; sister Faye Farr of Naylor, Georgia; brother and sister-in-law Jimmy and Linda Bruce of Lakeland, Georgia and numerous nieces and nephews. Funeral Services will be held at 11:00 AM on Friday, June 4 at the Lakeland United Methodist Church, 80 West Main St., Lakeland, Georgia 31635. Reverend Joseph Carter will be officiating. The graveside service will be private. The family will receive friends at the church one hour prior to the service. Floral tributes may be made or monetary contributions in Memory of Martha Neugent to the Alzheimer’s Association. Kind messages and words of sympathy can be expressed online at www.musicfuneralservices.com . The Neugent Family is being cared for by the professional and caring staff of Music Funeral Services, 88 W. Main St., Lakeland, GA 31635.

The family of Martha Francis Neugent created this Life Tributes page to make it easy to share your memories.

Send flowers to the Neugent family.