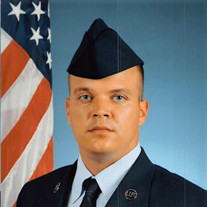 TSgt Michael Lane, II &#8211; 35 of Valdosta, Georgia passed away on Monday, May 17, 2021. He was born on June 2, 1985 in Greeneville, Tennessee to Michael Robert Lane and Deborah Sue (Dockery) Sumilas. He served his country proudly in the United... View Obituary & Service Information

The family of TSgt Michael Robert Lane II created this Life Tributes page to make it easy to share your memories.

TSgt Michael Lane, II – 35
of Valdosta, Georgia passed away on...

Send flowers to the Lane family.