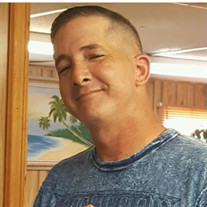 MSgt (Ret.) Samuel Paul Dell – 52 of Valdosta passed away on Thursday, January 13, 2022 at his residence. He was born in Atlanta, Georgia on January 1, 1970 to Bruce Edward Dell and Susie Gibson Kerr. He served his country as a member of the United States Army from which he retired. He was a highly decorated soldier receiving the Meritorius Service Medal, Army Commendation Medal (6 awards), Army Achievement Medal, Army Good Conduct Medal (6 Awards), National Defense Service Medal with Bronze Service Star, Global War on Terrorism Expeditionary Medal, and the Global War on Terrorism Service Medal as well as numerous other medals and commendations. He served with the 82nd Airborne, 25th Tropical, 101st Air Cavalry, 1st Cavalry and 35th Infantry divisions. He served in Iraq at Camp Tajil and was awarded the Iraq Campaign Medal with two Campaign Stars and the Bronze Star. After retiring he served as a corrections officer with the Lowndes County and Cook County Sheriff’s departments as well as security officer at the Department of Veterans Affairs office in Valdosta. He enjoyed riding motorcycles, was a die-hard University of Miami fan, he was given the honor of being a speaker to the team and he “bled orange and green.” He loved jeeps and fishing as well as spending time with his wife and kids. Survivors include: Wife: Elizabeth Ann Dell, Valdosta, Georgia; Daughter: Alexandria Dell, Valdosta, Georgia; Son: Cody Dell, Valdosta, Georgia; Father: Bruce Dell, Spartanburg, South Carolina; Mother: Susie Gibson Kerr, The Villages, Florida; Sister: Carmen Susan Dell, Orlando, Florida and a host of uncles, aunts, extended family and friends. Memorialization will be by cremation and a Celebration of Life service will be held at 1:00 P.M. on Saturday January 22, 2022 in the Valdosta Chapel of Music Funeral Services. The family will receive friends from 12:00 – 1:00 P.M. on Saturday January 22, 2022 at the funeral home. The family requests that no flowers be sent and that contributions be made to the family at https://gofund.me/307fe4d2 to assist with medical and other expenses. Kind words and expressions of sympathy can be left for the family at www.musicfuneralservices.com. The Samuel Paul Dell family is being served by the professional and caring staff of Music Funeral Services of Valdosta.

MSgt (Ret.) Samuel Paul Dell &#8211; 52 of Valdosta passed away on Thursday, January 13, 2022 at his residence. He was born in Atlanta, Georgia on January 1, 1970 to Bruce Edward Dell and Susie Gibson Kerr. He served his country as a member... View Obituary & Service Information

The family of MSgt. (Retired) Samuel Paul Dell created this Life Tributes page to make it easy to share your memories.

Send flowers to the Dell family.