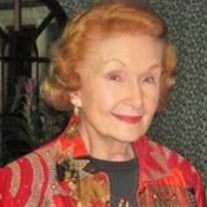 Nell Patten Roquemore, age 97, of Lakeland, Georgia passed away peacefully, surrounded by family, on Thursday, September 16, 2021. Nell was born March 10, 1924. A visitation will be held Sunday, September 19, from 5:00 PM to 7:00 PM at the Threatte Center, 209 US Highway 221, Lakeland, GA 31635. The funeral will be held Monday, September 20, at 11:00 AM at First Baptist Church Lakeland, 15 E Main Street, Lakeland, GA 31635 with a graveside service to follow. For those who can’t attend, the service will be live streamed on Music Funeral Services Facebook page. Nell Roquemore loved her community, her family, and creating memories. So much so, that she documented their history by authoring “Roots, Rocks, and Recollections” to keep a written record for future generations. Her “Roots” were firmly planted in the land of Lanier County and she was so proud to call it home. She lived there her entire life; she raised her family there, her “Rocks”; and it was there that so many of her stories were based, her “Recollections”. In addition to her first book, Nell used her abundance of research to ensure others would know the history of her beloved Lanier County and thus penned “Lanier County: The Land and Its People”. Nell was a graduate of the Georgia State Woman’s College (now known as Valdosta State University) in 1944. She majored in violin and enjoyed her time there, with the exception of horseback riding and sewing coursework. Nell joined the First Baptist Church of Lakeland at age 11 and loyally served the congregation along with playing her violin in services there for over 80 years. At age 89, she rededicated herself to the Lord showing us all that we can never allow our spiritual journey to cease from growing. She worked tirelessly to build a better community for her friends and neighbors. She served them all well, including as former Mayor Pro Tem of Lakeland, past President of The Lanier County Garden Club, Lakeland Postmaster, School Teacher, Secretary to Generals at Moody Air Force Base, and as Co-Chair of Let’s Improve Lanier’s Appearance (LILA). Nell’s dedication to LILA evolved into a lifelong beautification initiative, most recently establishing the Milltown Murals project, for which Lakeland was proclaimed “Georgia’s Historic Mural City”, by Nell’s friend and then governor, Sonny Perdue. Nell was an extensive traveler and linguist, having traveled to every continent except Antarctica, and yet, her heart never left Lanier County. She was enthusiastic about many things, she loved golf, she loved bridge, and she surely loved her husband. She was passionate about words, always reading, writing, or thoroughly enjoying a word game, especially crossword puzzles and Scrabble. She was also someone who believed everyone should be able to dance – her birthday celebration developed into an annual ball that became a tradition after Bill Roquemore passed away in 1997 and continued for twenty years, including family, friends, and later welcoming the entire community. She so loved dancing, that she competed in Valdosta’s Dancing with the Stars competition at the age of 94 and waltzed her way to victory (for charity, of course). Nell shared many of her recollections over her 97 well lived years. She was the first woman honored by the South Georgia Council with the Boy Scouts Distinguished Citizen of the Year Award. In 2017 she shared her life lessons in a commencement speech she wrote and delivered for Abraham Baldwin Agricultural College (ABAC). She often shared her valuable marriage advice – The Three A’s: Affection, Admiration, and Appreciation. For advice on living, she felt two lessons were important for all to live by – smile at people and always say “thank you” when it’s deserved. The “Rocks” that are her extensive Roquemore family, may well be her greatest legacy and the one she was most proud of. Her surviving children and spouses include William Alexander “Rocky” Roquemore, Jr. (Pam), (Barbara Roquemore), James Winston “Jim” Roquemore (Karen), Robert Thomas “Bob” Roquemore (Jan), and Lee Roquemore Burton. Her surviving grandchildren and spouses include William Alexander “Bill” Roquemore III (Erica), Christopher David “Chris” Roquemore (Crystal), Jolie Roquemore Vigh (Jason), James Winston “Jay” Roquemore, Jr., Martha Nell Roquemore Burleson (Matt), Heather Kaney Burge (Roger), Mae Clarice Hicks (Randy), Robert Everett “Bucky” Roquemore (Trudy), Joe “Hogan” Kaney (Rachel), ”Laura Anne” Roquemore McLaurin (Hugh), as well as her many surviving great-grandchildren, great-grandchildren’s spouses, and great-great-grandchildren who are all too numerous to name, but each so special to her. Nell was preceded in death by her beloved husband, William Alexander “Bill” Roquemore, son, John Patten “Pat” Roquemore, and granddaughter, Shannon Lynn Roquemore. A special appreciation, especially, to Pam Roquemore and her beloved sitters, who served Nell faithfully as her health declined, bringing much comfort and support to the family at the end of her life. Nell, known as Mama, Grandmama, or G.G. by those who loved her most, hosted many special family events, including Easter celebrations, an annual Christmas holiday gathering, quail hunts, and her annual Birthday Ball, that will live in the hearts of her family forever. Nell taught us with her life, lessons which we all hope to emulate – integrity, a servant’s heart, love, kindness, gumption, faithfulness, humility, and commitment. She has made an impact like none other and will be greatly missed. Should you wish to make a charitable contribution in honor of Nell Patten Roquemore, donations can be sent payable to the Milltown Foundation, at P.O. Box 217, Lakeland, GA 31635.

Nell Patten Roquemore, age 97, of Lakeland, Georgia passed away peacefully, surrounded by family, on Thursday, September 16, 2021. Nell was born March 10, 1924. A visitation will be held Sunday, September 19, from 5:00 PM to 7:00 PM at the Threatte... View Obituary & Service Information

The family of Nell Patten Roquemore created this Life Tributes page to make it easy to share your memories.

Send flowers to the Roquemore family.