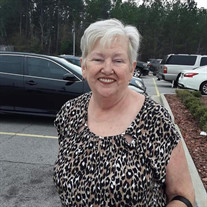 Patricia Diane Hendricks &#8211; 65 Of Homerville, Georgia passed away at her home on Sunday, August 15, 2021. She was born in Homerville, Georgia on August 4, 1956 to Virnece Pitts. She enjoyed spending time with her grandchildren and great... View Obituary & Service Information

The family of Patricia Diane Hendricks created this Life Tributes page to make it easy to share your memories.

Send flowers to the Hendricks family.