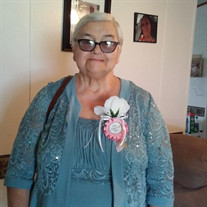 Mrs. Wynema Marie Vann, 75 years young, of Nashville, Ga, went to be with the Lord on August 13,2020. She was born January 3, 1944 in Dekalb County, Alabama to the late Ralph Bell & Irene Colley-Bell. She was preceeded in death by Husband, John T. Vann, Sr. and sister Slyvia Fairchild. Survivors include one daughter Marie (Phillip) Cook of Nashville, Ga. Sons and Daughter in laws: Jeffery (Sherry) Brown of Rome, Ga. Jason Scroggins of Ellijay, Ga James (Tristan) Scroggins of Dallas, Ga. Step sons: Scott (Brandy) Kell of Sarasota, FL. John Vann Jr of Graham, Al. James Vann of Graham, AL Extended family Cheryl (Ronnie) Lynch of Dallas, Ga. She was blessed with 6 Grandchildren: Cristina Wood Terry Oliver Nolan Scroggins Elizabeth Scroggins Taylor Baker Johnathan Kell 7 Great-Grandchildren: Aliyah Black Alyrik Wood DaKhari Black Kady Wood Dylan Deloach Jr. Grayson Deloach Hayley Deloach She has 1 niece and 1 nephew Special friends include: Mrs. Sybil Eller of Canton, Ga. Dennis Coker of Pigeon Forge, Tn Oscar Blalack of Florida Konrad of Graham, AL. Nema as everyone called her loved cooking shows, reading and doing puzzles. She worked for Huddle House in Marietta, Ga. for many years as a cook. She gained the nickname " Huddle House Queen" from her friend Dennis Coker. She would watch Price is Right and always complain about how people acted. Marie always told her "Mom you would do the same". Paula Deen was her IDOL. So one year for Mother's Day, Marie made reservations for her to eat at Paula Deen's Restaurant in Savannah. She smiled so big and for many days. Marie said she called everyone she knew to tell them what she had done. She told Marie that was the BEST day ever!! Her bestfriend Sybil and her would talk everynight, and before they hung up, both would tell each other " I LOVE YOU THE MOSTEST AND THE BESTEST TO THE MOON AND BACK".

Mrs. Wynema Marie Vann, 75 years young, of Nashville, Ga, went to be with the Lord on August 13,2020. She was born January 3, 1944 in Dekalb County, Alabama to the late Ralph Bell & Irene Colley-Bell. She was preceeded in death by Husband,... View Obituary & Service Information

The family of Wynema Marie Vann created this Life Tributes page to make it easy to share your memories.

Send flowers to the Vann family.